One might describe the character of Chuck Noland, played convincingly by Tom Hanks, as the latest reincarnation of Robinson Crusoe.

The plane crash sequence for me at least, appeared so terrifying I imagine the in-flight movie market for this film was severely affected. Reminds me of watching ‘Titanic’ on a cross-channel ferry once..

He is the sole survivor. First, frustration at the predicament gets to him and then, as hopes of rescue fade, it dawns on him that his chances of getting back home are slim.. Four years go by; and Chuck has learned how to survive on his own, with only the natural resources of the island and several Fed-Ex package contents that he uses. He vows to himself to deliver one someday, and leaves it unopened..

Incidently, Robert Zemeckis, the film director, was asked at a publicity session what was in the unopened package. He jokingly replied that it was a waterproof, solar-powered, satellite phone!

Clearly owing an enormous debt to Daniel Defoe, and his character, Robinson Crusoe, Chuck earns our admiration after coping with the death of his co-travellers, having to extract a rotten tooth, feeding himself by catching fish with a spear, and not forgetting the coconuts.. A photograph of his girlfriend Kelly has kept his hopes alive all these years. Finally, Chuck takes the opportunity to take off for home: He sets off on a wooden raft with a sail that he devises. Predictably, back home he was assumed dead.

My contribution to his predicament is simple. How did he cope with the loneliness and lack of companionship?  (See Post  Loneliness and the appeal of Robinson Crusoe ) Robinson Crusoe famously busied himself by ‘civilising’ Man Friday, but Chuck has a different approach. An early draft of the script had Chuck having two different personalities talking to each other, Good Chuck and Bad Chuck, that was rejected, but the alternative was inspired.

He creates a friend and companion during his four year confinement, in Wilson, a volleyball from one of the FedEx packages,and in one scene, risked his life to avoid losing him. This 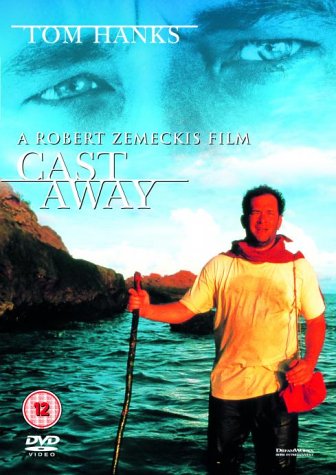 would not be true to life if we could not identify with the yearning for companionship implied. Incidentally, ‘Wilson’ was bought at a charity auction after the film, for $18,400!

A beautifully created film, a worthy update to a perennially fascinating conundrum, psychologically challenging (what if that happened to me?), and with a conclusion so realistic, it was hard to believe the story of Chuck was a story. Of course, that was also the intention of Daniel Defoe with Robinson Crusoe. Excellent.