The Grand Design published on September 9th 2010, these are some pre-launch comments. 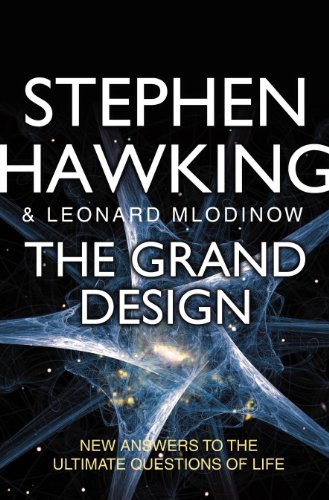 Tap ‘Grand Design’ into Amazon currently, and it will show you books and DVD’s associated with the TV series. Tell any of the architects or designers that feature on that programme that their efforts in renovating or creating new buildings were a product of chance, or ‘self- creation’ and they might rightly feel insulted. They might also feel their intelligence had been insulted too. My point is the same as that of the apostle Paul, ‘Of course, every house is constructed by someone, but he that constructed all things is God’ (Heb.3:4). The Athenians of the time held diverse views, only one of which was that the Creator was unknown, or unknowable (Acts 17: 23).

Professor Stephen Hawking has claimed that no divine force was needed to explain why the Universe was formed. In A Brief History of Time , he differentiated between partial theories that help explain aspects of what we observe about the Universe, and the ‘holy grail’ of science, a single theory that explains all phenomena, or if you like, a ‘Theory of Everything’.  He appears as far from this goal as ever.

The sub-title, ‘New answers to the ultimate questions of life’,  inevitably reminded me of the scene in The Hitchhiker’s Guide to the Galaxy, when the central characters meet Slartibartfast, a planetary coastline designer who was responsible for the fjords of Norway. He relates the story of how a super-race built a computer named Deep Thought in order to calculate ‘The Answer to the Ultimate Question of Life, the Universe, and Everything’. When the answer was revealed to be 42, Deep Thought predicted that another computer, more powerful than itself, would be necessary in order to calculate the question for the answer.

In his latest book,The Grand Design, an extract of which was published in Eureka magazine in The Times , Professor Hawking said: “Because there is a law such as gravity, the Universe can and will create itself from nothing. Spontaneous creation is the reason there is something rather than nothing, why the Universe exists, why we exist.” He added: “It is not necessary to invoke God to light the blue touch paper and set the Universe going.” He concludes: ‘The Big Bang was the result of the inevitable laws of physics and did not need God to spark the creation of the Universe’..

Two further problems here. If you cannot accept God, by definition, in invoking physical laws, you have to accept there was a lawmaker. This was the chief argument of  Sir Isaac Newton. Secondly, although the theory is popular, I wonder how many scientists of Professor Hawking’s stature, accept his own concept of the ‘Big Bang’?

Professor Hawking, born in 1942, worked at Cambridge’s Department of Applied Mathematics and Theoretical Physics for more than 30 years. He held the post of Lucasian Professor of Mathematics, a chair once occupied by Sir Isaac Newton, and first developed symptoms of Motor Neurone disease at the age of 21. He retired last year.

He was diagnosed with Amyotrophic Lateral Sclerosis, known in Britain as Motor Neurone disease, which confined him to a wheelchair and meant he has to speak through an electronic voice box. His survival for 40 years with a condition sufferers often live no more than five years after diagnosis, is regarded as extraordinary if not unprecedented by specialists.

Dr Kirstine Knox, chief executive of the Motor Neurone Disease Association, of which he is patron, said: “Professor Hawking has never allowed himself to be defined by his illness, and this approach to life with Motor Neurone disease is an example to all of us.” All should applaud the effort he has made to achieve what he has.

Metaphorically or not, in A Brief History of Time, Professor Hawking’s most famous work, he appeared not to dismiss the possibility that God had a hand in the creation of the world. He wrote in the 1988 book: “If we discover a complete theory it should in time be understandable in broad principle by everyone.. it would be the ultimate triumph of human reason — for then we should know the mind of God.”  In his new book he rejects Sir Isaac Newton’s theory that the Universe did not spontaneously begin to form but was set in motion by God.

In June this year Professor Hawking told a Channel 4 TV series that he didn’t believe that a “personal” God existed. He said “The question is: Is the way the Universe began chosen by God for reasons we can’t understand, or was it determined by a law of science? I believe the second. If you like, you can call the laws of science ‘God’, but it wouldn’t be a personal god that you could meet, and ask questions.” He appears to express his personal belief, valid as such, of course, but perhaps unworthy of the man Time magazine once described as best placed to ‘unlock the secrets of the Universe’?

Commentators discuss physicist Stephen Hawking’s argument in his new book that science can explain the Universe’s origin without invoking God, instead arguing that the existence of gravity means the Universe can create itself from nothing.

Chief Rabbi Lord Sacks (The Times) says that Stephen Hawking’s idea is both unoriginal and that he doesn’t understand that religion and science answer different questions:

“What would we do for entertainment without scientists telling us, with breathless excitement, that ‘God did not create the Universe’, as if they were the first to discover this astonishing proposition? Stephen Hawking is the latest, but certainly not the first. When Napoleon asked Laplace, two hundred years ago, where was God in his scientific system, the mathematician replied, ‘Je n’ai pas besoin de cette hypothèse‘. ‘I do not need God to explain the Universe.’ We never did. That is what scientists do not understand.

“There is a difference between science and religion. Science is about explanation. Religion is about interpretation. Science takes things apart to see how they work. Religion puts things together to see what they mean. They are different intellectual enterprises.”

Roger Highfield (The New Scientist) dismisses the newness of the theory:

“Media furore over Stephen Hawking’s new book, The Grand Design, has made it the biggest science news story of the day. But it’s not like Hawking has suddenly given up a religious belief – let alone proved that God doesn’t exist…

“As Hawking’s long-suffering assistant dealt with a deluge of enquiries from journalists from around the world, she told me how the furore says more about the silly season than any change of mind. It also says much about how God is used to sell science to the public.”

The Guardian imagines the relationship between Stephen Hawking and God:

“One accepts that if God were to choose one day to explain the Universe to Hawking, the professor would be one of the few people on the planet with any serious chance of understanding the conversation. But spontaneous creation is, for most folk, just a contradiction in terms. God may or may not find all this amusing. The thing is – how to put this gently to Professor Hawking? – that God does not necessarily follow the ins and outs of our many arguments about His existence.”

Quentin de la Bedoyere (The Catholic Herald) argues that there is still a gap in Stephen Hawking’s explanation of the creation of the Universe:

“Most particularly it would not touch the question of how something existing comes out from nothing. That is a question which science cannot answer, and will never answer, because nothingness is not within its domain. Hawking apparently does not address this question – which is the true and ultimate Theory of Everything.”

John Lennox (The Daily Mail) describes himself as a scientist and a Christian who teaches maths at Oxford university. He argues that Stephen Hawking is wrong to think they can’t live alongside each other:

“Much of the rationale behind Hawking’s argument lies in the idea that there is a deep-seated conflict between science and religion. But this is not a discord I recognise. “For me, as a Christian believer, the beauty of the scientific laws only reinforces my faith in an intelligent, divine creative force at work. The more I understand science, the more I believe in God because of my wonder at the breadth, sophistication and integrity of his creation.

“The very reason science flourished so vigorously in the 16th and 17th centuries was precisely because of the belief that the laws of nature which were then being discovered and defined reflected the influence of a divine law-giver.”

Graham Farmello (The Telegraph) is skeptical about the reasons behind scientists getting involved in the question of God:

“The ‘science-religion relationship’, in so far as there is one, continues to be a crowd-pleaser. It seems to be a fundamental law of PR that the God-science debate is a sure-fire source of publicity. Always welcome when one has a book to sell.”