`When asked by an anthropologist what the Indians called America before the white man came, an Indian said simply, “Ours” 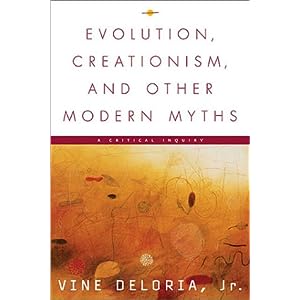 Starting with the knee-jerk reaction of evolutionists to the decision of the Kansas State Board of Education to relax opposition to alternatives to evolution being discussed in schools, Evolution, Creationism, and Other Modern Myths (2002), is a unique, revelatory critique of much that is wrong with science today. Vine Deloria Jr. quotes from an impressive range of scientists, philosophers and other writers, with familiarity and an ability to summarize their arguments simply and concisely, often exposing the flimsy logic employed by respected authorities..

“Who will find peace with the lands? The future of mankind lies waiting for those who will come to understand their lives and take up their responsibilities to all living things. Who will listen to the trees, the animals and birds, the voices of the land? As the long-forgotten peoples rise and reclaim their ancient heritage, they will discover the meaning of the land of their ancestors. That is when the invaders of the North American continent will finally discover that for this land, God is red”.

He sympathizes with the scientist’s dilemma, and his appreciation for the limitations of science may be discerned in his quote of the Chippewa leader Rising Sun, who pronounced the scientific view inadequate, `not bad, or untrue, but inadequate’. Also quoting Red Tomahawk, Sioux tribal elder, `The knowledge and use of any of the objects on earth around us is as liable to lead a man wrong as lead a man right. It is merely power, with no way of knowing how to use it correctly.. this is the old teaching, it is true’.  Think of this and think of, for example, nuclear power.
The problem is not confined to science; History, at least as taught, likewise has its limitations. Historian Arnold Toynbee said, `It is as though a Geographer were to produce a book entitled ` World Geography’ which proved on inspection to be all about the Mediterranean Basin and Europe’.
Not only focusing on the Native American tradition, Vine Deloria gives his due to eastern philosophies. He is not arguing so much for their superiority over western traditions, as for their validity. With such a view, he expresses a plea for justice, and in so doing, exposes science and evolution as well as the christian doctrines of the west that underpin it, proving in the end they are, `false to their own power’ (2 Tim.3:5).
“We often see what we expect to see and are hardly aware of the world as it really is. Astronomy in the age of Copernicus may illustrate this, but it is equally true of today, despite scientific claims of objective, unbiased research. When new scenarios are put forward, we must demand that our intellectuals offer us probable storylines that make sense of the new data. We cannot afford complacency, yet realistically, it may take many decades to fully absorb the implications of the data newly acquired”.
The problem with the science/religion confrontation today is that science- particularly evolution- is offered as a secular alternative to the biblical explanation of how things began. Substituting `chance’ or `mother nature’  as science writers do, is simply to remain within the original framework of inquiry, and thus to fail to ask the really meaningful questions. In other words, they demand blind faith at least to the equal extent of proponents of fundamentalist Christianity. With science, the perception labelled `objectivity’ is loudly endorsed, but seemingly impossible to achieve.

Paul Davies, in  The Mind of God , said: ‘God is identified with nature itself, everything is a part of God, and God is everything‘. As a statement of belief, this is not new, but in clearly seeking to be all things to all  men, and ignoring mainstream traditions, cannot be acceptable to anyone but Paul Davies. To his credit, Davies argued that the faith scientists have in the immutability of physical laws has origins in Christian theology, and that the claim that science is ‘free of faith‘ is ‘manifestly bogus‘, and “the existence of mind.. is surely a fact of fundamental significance. Through conscious beings the universe has generated self-awareness.This can be no trivial detail, no minor by-product of mindless, purposeless forces. We are truly meant to be here”.

Gerardus Van Der Leeuw, Dutch professor of religion at the University of Groningen in the 1930’s, observed: `What we moderns call `nature’ in fact has a prominent role within all religions without exception. Yet it is neither nature nor natural phenomena as such that is ever worshipped, but always the Power within, or behind’. Contrast this with Jesus’ words to the Samaritan woman (John 4:22); `You worship what you do not know; we worship what we know, because salvation originates with the Jews’.
On November 8, 2005, the Kansas State Board of Education voted to instruct science students along the lines of the Discovery Institute, that evolution could not rule out a supernatural or theistic source, that evolution itself was not fact but only a theory, and one in crisis, and that Intelligent Design must be considered a viable alternative to evolution.

In 1969, Vine Deloria Jr.(1933- 2005) published the first of more than twenty books, Custer Died for Your Sins: An Indian Manifesto.  Deloria wanted to address Indian stereotypes and challenged white audiences to take a new look at the history of American expansionism. The book focused on the Native American goal of sovereignty without political and social assimilation. The book could be described as a good-natured polemic, combining scholarship, advocacy, and humour.

In 1995, Deloria argued in his book Red Earth, White Lies: Native Americans and the Myth of Scientific Fact that the ‘Bering Land Bridge’ never existed, and that the ancestors of the Native Americans did not migrate to the Americas over such a land bridge, as has been claimed by many archaeologists. Rather, he asserted that the Native Americans may have originated in the Americas, or reached them through transoceanic travel, as some of their creation stories suggested. He did not accept that native peoples bore responsibility for prehistorical faunal extinctions. His views on the age of certain geological formations, the length of time Native Americans have been in the Americas, their possible co-existence with dinosaurs, etc. were very influential in the renewed interest in Native American belief.