Titanic: The Ship That Never Sank? (1998) by Robin Gardiner

‘The unthinkable about the unsinkable..(Oxford Times)

The comment made by the Oxford Times’ writer sums up the book nicely. Conspiracy theories don’t get more controversial than this. After reading the book, even if you cannot accept every conclusion, it was good to welcome a sideways look at a subject everyone seems to be an expert on, particularly as we near the centenary of this great maritime tragedy.

One of the most controversial and complex theories is that the Titanic sinking was more than a tragic accident. It was put forward by Robin Gardiner in his book, Titanic: The Ship That Never Sank? (1998).  Following on from The Riddle Of The Titanic(1995), co-authored with Dan Van Der Vat, the author includes more facts to support their theory of the switch perpetrated by the White Star line, and startling evidence of the possible collusion of the British Government in a cover-up. Gardiner draws on several events and coincidences that occurred in the months, days, and hours leading up to the sinking of the Titanic, and concludes that the ship that sank was in fact the Titanic’s sister-ship RMS Olympic, disguised as the Titanic.The Olympic was the older sister of the Titanic, built alongside the more famous vessel but launched in October 1910. Her exterior profile was nearly identical to the Titanic, save for small detailing such as the promenade deck windows. These were not glazed in the Olympic. In the Titanic the forward end of the promenade deck was enclosed with smaller glazed windows to protect passengers from spray, 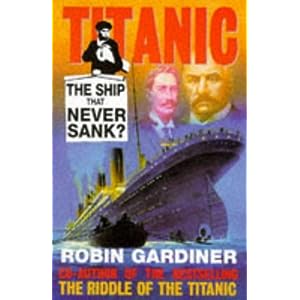 also serving as a visual difference to the earlier ship. Other differences are detectable in available photographs, such as the forward port hole arrangement, and differences in the hull plate detailing. Such differences are usefully compared with the images of the wreck. Convincing indeed are references to the propellers, as these were how Robert Ballard confirmed the identity of the wreck as discovered in 1985.

On 20 September 1911, the Olympic was involved in a collision with the Royal Navy cruiser HMS Hawke near Southampton. The cruiser smashed its ram into the side of the Olympic, seriously damaging both ships. The naval inquiry found the Hawke free from blame. This set in motion Gardiner’s theory. White Star Line was allegedly not insured for the cost of fixing the damaged Olympic (which, according to Gardiner, had sustained damage to the central turbine mountings and keel). The White Star’s flagship would also be out of action during any repairs, and the Titanic’s completion date would have to be delayed. All this would amount to a serious financial loss for the company. Gardiner proposes that, to make sure at least one vessel would be earning money, the 95% complete Titanic was converted to become the Olympic. Gardiner states that few parts of either ship bore the name, other than the easily removed lifeboats, bell, compass binnacle, and name badges. Thus, Gardiner believes the Titanic spent 25 years in service as the Olympic.

Gardiner uses as evidence the length of Titanic’s sea trials. The Olympic’s trials in 1910 took two days, including several high speed runs, but the Titanic’s trials reportedly only lasted for one day, with no working over half-speed. Gardiner says this was because the patched-up hull could not take any long periods of high speed.

Gardiner suggests the plan was to dispose of the Olympic to collect insurance money. If numerous ships were stationed nearby to take off the passengers, the shortage of lifeboats would not matter as the ship would sink slowly and the boats could make several trips to the rescuers. Orders to crews manning the lifeboats may explain the unresolved issue of why the lifeboats left the sinking ship under capacity.

The Titanic was originally meant to sail in March 1912, but the collision between the Olympic and the cruiser, HMS Hawke, and the subsequent repairs to the hull and replacement of one of the Olympic’s propellor shafts delayed the completion of the Titanic because Harland and Wolff had to carry out the repairs. Titanic began her maiden voyage at noon on April the 10th, 1912. Even that date had been in doubt, because a coal strike meant that the White Star line had to appropriate coal from other ships to use on Titanic. Perhaps the rush for fuel contributed to the spontaneous coal fire that started in number 10 bunker, boiler room 6. The books discuss the possible effects of this fire, confirmed by eyewitness Paddy Fenton, a seaman who survived the disaster.

Gardiner maintains that on 14 April, Officer Murdoch was not officially on duty yet was on the bridge because he was one of the few high-ranking officers who knew of the plan and was keeping a watch out for the rescue ships. One of Gardiner’s most controversial statements is that the Titanic did not strike an iceberg, but an IMM rescue ship that was drifting on station with its lights out. Gardiner based this hypothesis on the idea that the supposed iceberg was seen at such a short distance by the lookouts on the Titanic because it was actually a darkened ship, and he also questions the nature of the damage to the steel double-bottomed Titanic.

Gardiner further hypothesizes that the ship that was hit by the Titanic was the one seen by the Californian firing distress rockets, and that this explains the perceived inaction of the Californian (which traditionally is seen as failing to come to the rescue of the Titanic after sighting its distress rockets). Gardiner’s hypothesis is that the Californian was not expecting rockets, but a rendezvous. The ice on the deck of the Titanic is explained by Gardiner as ice from the rigging of both the Titanic and the mystery ship it hit. The collision, according to Gardiner, caused the already compromised structure of the ship to give way, sinking the ship.

The time of the disaster, April 1912, is particularly poignant, given the fact that soon after, with the start of World War One, we entered a new volatile era, and so, Titanic encapsulated many of the features of the old era, including over-confidence, and, if Gardiner is only partially correct, financial corruption (although that hasn’t changed!).

To quote The Riddle Of The Titanic, “If there is one thing on which the authors wholeheartedly agree, it is that readers should decide for themselves as they study the book which aims to be the most thorough general reappraisal of the Titanic legend ever published.”  This made sense to me.

Researchers Bruce Beveridge and Steve Hall took issue with many of Gardiner’s claims in their book, Olympic & Titanic: The Truth Behind the Conspiracy. Mark Chirnside, author of  Olympic Titanic Britannic: An Illustrated History of the ‘Olympic’ Class Ships has also raised serious questions about the switch theory.

On 31 March 2012, Titanic Belfast, a £77m tourist attraction on the regenerated site of the Harland and Wolff shipyard where Titanic was built, was officially opened to the public.