The years 1680 and 1682 were years of unusually bright comets. Many pamphlets were printed, especially in Germany, on the imminent end of the world; at the very least, great catastrophes were expected. This was nothing new. In earlier centuries and also earlier in the seventeenth century, comets were regarded with awe and every possible evil effect was ascribed to them.

END_OF_DOCUMENT_TOKEN_TO_BE_REPLACED

Based upon material collated by  Dr.Immanuel Velikovsky  and published in Kronos journal

Dinosaur fossils have been found in the Laramie basin in Wyoming together with land plants “remarkably modern in their aspect”; these land plants suggest a much more recent age than the Cretaceous, said to have ended about 70 million years ago.   The plants were referred by paleo-botanists to at least the Tertiary epoch, or the Age of Mammals.

“The Laramide group has given rise to one of the two most prolonged controversies in the history of American geology.” [C.O. Dunbar, Historical Geology (1949), p. 375.]

But the paleo-zoologists persisted in ascribing the fossils along with the plants to the Cretaceous.

In the red sandstone wall of Hava Supai Canyon in the region of the Grand Canyon in northern Arizona were discovered figures of animals cut by some prehistoric man.  “The fact that some prehistoric man made a pictograph of a dinosaur on the walls of this canyon upsets completely all of our theories regarding the antiquity of man.” [Dunbar]

“The fact that the animal is upright and balanced on its tail would seem to indicate that the prehistoric artist must have seen it alive.” [Dunbar]

Dinosaurs were in the vicinity, as is established by footprints discovered not more than one hundred miles from the picture.

“Dr. Ales Hrdlicka, President of Anthropology, has given a lecture on these discoveries. Though his facts seem almost fantastic, they demand attention. They are actually nothing more or less than an image of a dinosaur supporting itself on its hind legs and balanced by its enormous tail. And a second drawing shows a saurian attacking a man. … the third drawing portrays a human figure beside a mastodon.” [Samuel Hubbard, Discoveries relating to prehistoric man by the Doheny Scientific Expedition in the Hava Supai Canyon, Northern Arizona (1927), p. 5. E. George, referring to these drawings in  The Adventures of Mankind (1931)]

The paleontologist’s scheme requires the extinction of dinosaurs sixty to seventy million years before man appeared on the Earth.

“Either man goes back in Geologic time to the Triassic Period, which is millions of years beyond anything yet admitted (assigned the period 200-240 million years ago), or else there were ‘left over’ dinosaurs which came down into the age of the mammals. Yet even this last conclusion indicates a vast antiquity.” [Hubbard]

END_OF_DOCUMENT_TOKEN_TO_BE_REPLACED

A meteor with estimated mass of 10,000 tons by NASA (on entry to Earth’s atmosphere) exploded Friday morning over Russia’s Ural region and its shock-wave caused injuries to over 1,000 people. It took out windows and walls in the city of Chelyabinsk.

Some years ago, I personally witnessed a much smaller fireball, and I was convinced I was seeing an airplane crash.

On the same day, Friday 15th February 2013, skimming closer to the earth than any other asteroid of its size,  Asteroid 2012 DA14 missed us by 17,100 miles, a margin closer than some satellites.

END_OF_DOCUMENT_TOKEN_TO_BE_REPLACED

“Maps of the Ancient Sea Kings: Evidence of Advanced Civilization in the Ice Age”  ISBN:0932813429 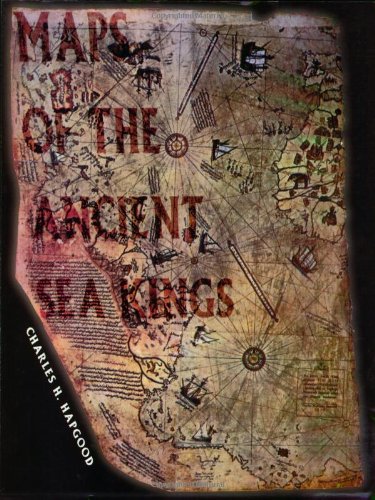 Charles Hapgood, after exhaustive research and imaginative mathematical and cartographic experiments, came to some remarkable conclusions and eventually published them in a book called ‘Maps of the Ancient Sea Kings’. Briefly these are the conclusions:

END_OF_DOCUMENT_TOKEN_TO_BE_REPLACED

Catastrophe: An Investigation into the Origins of the Modern World (1999) by David Keys

During the last few years, there has been an upsurge of interest in theories about Catastrophism. A natural disaster like a large meteor impact or the eruption of a super-volcano would have the capability to wreck the modern world. Even the recent economic cost of one small Icelandic eruption should give pause for thought. There are at least two good reasons for concern. Firstly, the growing recognition that man has a responsibility to recognize the threats to our planet, in this respect, a similar argument to the Green environmentalists, but secondly, with computer and other technologies, we can analyse both fresh and long-held historical data in a way that clarifies the underlying issue.  David Keys’ Catastrophe argues that a massive volcanic eruption in the sixth century precipitated the collapse of the ancient world.

He suggests that an eruption of Krakatoa in 535 A.D. was the primary cause of a global climatic catastrophe that caused widespread famine, pestilence, and extinction of many civilizations around the globe. Keys reasons that a huge volcanic eruption, near the equator, sent volcanic emissions high into the stratosphere where air currents distributed them around the globe, creating a veil through which sunlight struggled to penetrate. As a result, the earth sustained flooding and cooling over the next century, which caused the failure of crops. People and animals scattered and either starved to death, or died from  pestilences  that swept the civilized world in the sixth century.

END_OF_DOCUMENT_TOKEN_TO_BE_REPLACED

The Reversing Earth (1982) by Peter Warlow

‘The Reversing Earth’ is a book that sets out to answer some very disturbing questions, Why did ancient peoples insist the sun at one time rose in the west and not the east? What could account for the magnetic anomalies preserved in our sea beds? Why did conditions for mammoths and many other animals change so catastrophically, and relatively recently? These and other questions not satisfactorily answered by any one theory, are brought together in a comprehensive, readable, and logical theory that also serves as a guide to Catastrophist, as opposed to Uniformitarian scientific thinking. It thus gives due consideration to Velikovsky, but should be more palatable to his detractors, as this theory does not involve impacts with other cosmic bodies. One of the original considerations by Velikovsky was why such a theory should be so unpalatable to us, and of course it is simply that, logically, if it happened once, it could happen again.

END_OF_DOCUMENT_TOKEN_TO_BE_REPLACED

The Riddle of Prehistoric Britain (1946)
I came to this author via John Mitchell’s  “Eccentric Lives and Peculiar Notions”  where Comyns Beaumont is the subject of Chapter 15. There he is described as a ‘revisionist geographer’,

which, considering he claims many of the original locations of ancient Greece, Egypt, and Palestine in Britain, is something of an understatement.
He noticed the similarities between British place names and those in the ancient world, and concluded that many of these places had, in reality, been in Britain itself. Loch Carron in Scotland, for instance, and the nearby village of Erbusaig sounded to his ears strangely like Acheron, the Greek river of hell, and the mythical purgatory Erebus. Achilles, the Greek hero, grew up on the island of Skyros, which could be none other than the Isle of Skye. Bath had to be Athens; the names of the two cities were too similar for it to be otherwise.
Then, reasoned Comyns Beaumont, if the Flood had occurred in north-western Europe, it was surely likely that Noah, and every other biblical character, had lived there too. The British Isles were the true cradle of world civilization.
END_OF_DOCUMENT_TOKEN_TO_BE_REPLACED

Immanuel Velikovsky, born in Vitebsk, Russia, 10 June 1895. He learned several languages as a child, graduating with full honours from Medvednikov Gymnasium, Moscow. He later studied at Montpelier, France, and Edinburgh, Scotland. At the outbreak of World War I, he returned to Moscow studying law and ancient history. He received his medical degree from Moscow University in 1921. In 1923, he married Elisheva Kramer, an accomplished violinist from Hamburg. That year they moved to Palestine, and he began medical practice. After studying in Vienna under Bleuler, a pupil of Freud’s, he began practising Psychoanalysis. In 1930, Velikovsky was the first to suggest that encephalograms would be found that would characterise epilepsy. In the summer of 1939, Velikovsky came to America to further his researches. He was one of the greatest original thinkers of the twentieth century, and his legacy continues to be the boldest, most provocative theory on the history of this earth, physical and cultural, a theory that has and will only increase in significance as time passes. If not correct in every detail, many of his ideas pass for the original work of others.   “During the course of his life, Velikovsky suffered the loss of his homeland, and the family left behind as he was forced to flee Bolshevik Russia, the near extermination of his race at the hands of the Nazis, the attempted suppression of his life’s work, and savage attacks upon his character and scholarship throughout the last three decades of his life”. As he once said, ” A newly discovered truth is first attacked as being false; but when it is finally accepted as true it is attacked as not being new.” END_OF_DOCUMENT_TOKEN_TO_BE_REPLACED