In The History of Rasselas, Prince of Abissinia , Samuel Johnson has the philosopher Imlac say: ‘That the dead are seen no more I will not undertake to maintain against the concurrent and unvaried testimony of all ages and of all nations. There is no people, rude or learned, among whom apparitions of the dead are not related and believed’. Johnson suggests universal experience alone has made belief in ghosts credible, and for every hoax there may be cited an instance not so easily dismissed.

The occult, the supernatural and the paranormal are as prevalent as ever, with people from all walks of life prepared to pay to consult with mediums, seers, astrologers, psychics, spiritualists and other self-proclaimed visionaries. Literally millions of pounds are also spent on magazines, films, books, tarot cards and other paraphernalia that deal with subjects that range “from astrology to witchcraft.” Millions of readers regularly consult newspaper horoscopes, with wide interest shown in conventions, lectures and fairs that deal with psychic matters. Why such interest in the supernatural? Among the reasons given are: “Fear of death, personal experience with premonitions and widespread treatment of the topic in books and films.” Many people are also drawn in by the “entertainment value” of the occult, often from childhood, or are “sincere people for whom the paranormal amounts to a religion or a body of knowledge that to them is or will prove to be scientifically valid.”

END_OF_DOCUMENT_TOKEN_TO_BE_REPLACED

Visit their web site at: www.assistnews.net

Turkmenistan has jailed two more prisoners of conscience. Protestant Pastor Ilmurad Nurliev has been given a four-year prison term on charges of swindling. The sentence was handed down on Oct. 21.

A story by Felix Corley for Forum 18 News Service reported that the pastor’s wife and church members insist the charges have been fabricated to punish him for his religious activity. Judge Agajan Akjaev of Mary Town Court in south-eastern Turkmenistan ruled that Nurliev will serve his sentence in the general regime labor camp in Seydi.This was confirmed by his wife and lawyer from the south-eastern town of Mary.

“The court also ruled that Ilmurad is a drug addict and ordered forced treatment for this in prison,” Maya Nurlieva told Forum 18 News Service. “This is unjust and a slander.”

In reality, Forum 18 said, Nurliev is being treated for diabetes, and his wife has been denied the opportunity to see him or give him his medication since his Aug. arrest.

In mid-September Ahmet Hudaybergenov, a Jehovah’s Witness who conscientiously objects to compulsory military service, was sentenced to 18 months.

Both Nurliev and Hudaybergenov are likely to be sent to Seydi labor camp, where Baptist and Jehovah’s Witness prisoners of conscience have previously been held. There have been indications that some of these prisoners were tortured in the camp with psychotropic (mind-altering) drugs.. END_OF_DOCUMENT_TOKEN_TO_BE_REPLACED

Psychologists  suggest that individuals differ in the degree they enthuse about change: there are innovators, who will be proactive during the change process, and adopters, who readily accept change, but the majority, who need some persuasion, are ‘laggards’ who remain skeptical of change, and ‘rejecters’ who openly oppose change.

The decline in British manufacturing has been seen as an example of this type of thinking. In the workplace, it is up to supervisors, as ‘change agents’ to ensure influence from laggards and rejecters is diffused. Change agents of course, can be managers, union representatives, teachers, nurses or politicians..

END_OF_DOCUMENT_TOKEN_TO_BE_REPLACED

Twenty three years have passed since the original Wall Street introduced Gordon Gekko, the insider trader who insisted ‘Greed is good’ and ‘Lunch is for wimps’, and eventually receives a jail sentence. The film stood up on its own, almost defining a whole ‘Yuppie’ generation, so why bring out a sequel now? 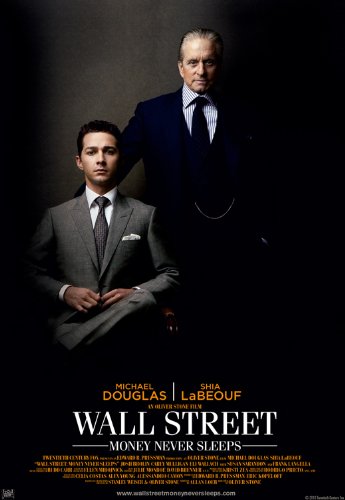 My suspicions are that a sequel will do no harm to the careers of Michael Douglas (Gordon Gekko) or director Oliver Stone, and despite the long shadow of the parent film, ‘Money never sleeps’ is a worthy enough sequel to likewise stand alone.

Less obvious perhaps, but a serious message is also illustrated here. The current global financial crisis represents a perfect opportunity to explore the human element behind what is happening. Oliver Stone is saying that not only did we fail to learn the lessons of the stock market crash following October 19th 1987, but with an avalanche of toxic debt, economic stagnation, and the prospect of long term recession, the worst could be yet to come.. END_OF_DOCUMENT_TOKEN_TO_BE_REPLACED

All too often, men see themselves as the centre of the universe. ‘Pride comes before a fall’ says the proverb, but why is it so harmful, and should we try to eliminate it? One definition of pride comes from Augustine: “The love of one’s own excellence”. In this sense, the opposite of pride is humility. Pride is sometimes viewed as healthy or as a virtue, but in the present context, it is a vice, an excessively high opinion of oneself, haughtiness, spiteful, or disdainful conduct or the arrogant treatment of others.

Since we all make mistakes, why does it seem so difficult to admit making a mistake? For one thing, we may be trying so hard not to make a certain mistake that when we do, we dislike admitting it even to ourselves. Who does not make mistakes? No human is infallible. Old and young, rich and poor, men and women, one and all are imperfect, and so make mistakes.

Doubtless in many cases the reason is pride. Admitting a mistake reflects on things we may take pride in, such as our knowledge, our skill or our carefulness. We want to have a good appearance in the eyes of others.

Without doubt a very telling reason why it is difficult at times to admit making a mistake is the blame, censure or punishment that may come because of having made a mistake, as when one causes a serious accident. Because of the shame that goes with making a mistake the tendency is to pin the blame on others. But if we can recognize why friends, family, acquaintances, or individuals we read about acted unwisely, it can help us to avoid the same pitfall.

In the Bible book of Daniel is an account of the king of Babylon, Nebuchadnezzar. Addressing him, Daniel said: “O king, because you have grown great and become strong, and your grandeur has grown great and reached to the heavens, and your rulership to the extremity of the earth..let the heart of a beast be given to you, vegetation they will give to you, to eat grass just like bulls..”

END_OF_DOCUMENT_TOKEN_TO_BE_REPLACED

WHAT IS LITERATURE? by William J. Long

“In an old English book, written before Columbus dreamed of a westward journey to find the East, is the story of a traveller who set out to search the world for wisdom. Through Palestine and India he passed, traveling by sea or land through many seasons, until he came to a wonderful island where he saw a man ploughing in the fields. And the wonder was, that the man was calling familiar words to his oxen, “such wordes as men speken to bestes in his owne lond.” Startled by the sound of his mother tongue he turned back on his course “in gret mervayle, for he knewe not how it myghte be.” But if he had passed on a little, says the old record, “he would have founden his contree and his owne knouleche..”

END_OF_DOCUMENT_TOKEN_TO_BE_REPLACED

William Joseph Long was an American writer, naturalist and minister. He lived and worked in Stamford, Connecticut.

As a naturalist, he would leave Stamford every March, often with his two daughters Lois and Cesca, to travel to ‘the wilderness’ of Maine. William Long believed that the best way to experience the wild was to plant yourself and sit for hours on end to let the wild creatures “come to you; and they will!”

They would stay in the wilderness until the first snows of October, although sometimes he would stay all winter. In the 1920s, he began spending his summers in Nova Scotia, claiming “the wilderness is getting too crowded”.

He shared many of the same ideas of ‘wilderness America’ conserving and revitalizing the human spirit, as John Burroughs, Ralph Waldo Emerson, Walt Whitman, and Henry David Thoreau, although as independent minded men, they were somewhat critical of each other.

He wrote of these wilderness experiences in the books Ways of Wood Folk (1899), Wilderness Ways (1900), Wood Folk at School (1903), Northern Trails (1905), Wood-folk Comedies (1920), and many others. His style was homely, individualistic, and compassionate, but perhaps lacking realism. Many of his early books were issued in school editions under the title of The Wood Folk Series.

Because of the increased interest in the natural world as a reaction to industrialization and urban life, many of his books were studied in the schools of the time. However, John Burroughs, adviser to President Roosevelt, accused William Long of gross exaggeration, if not outright lies, regarding his books and the reflections of nature therein. In March 1903, Burroughs published an article entitled “Real and Sham Natural History” in the Atlantic Monthly.